A day in the life of Integrate 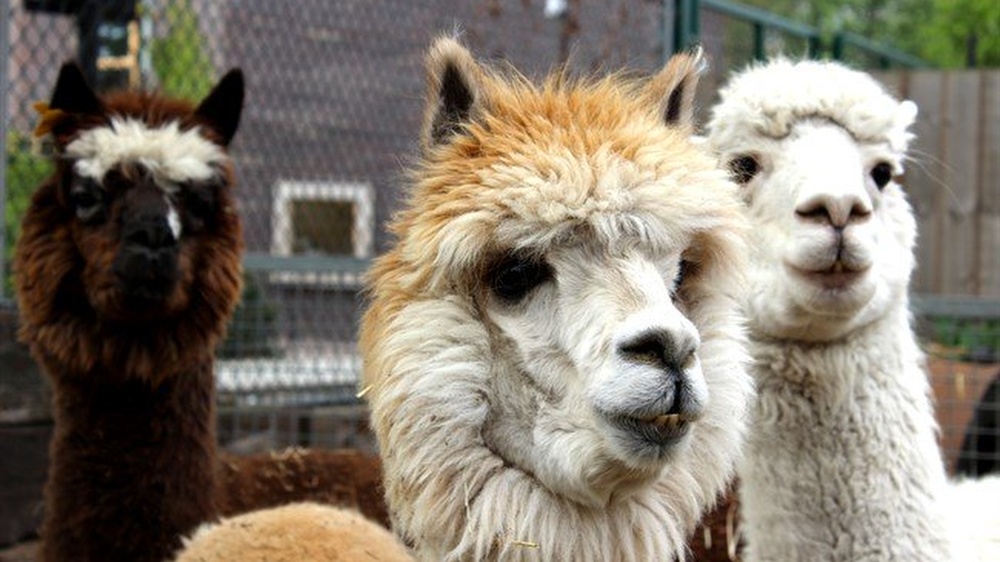 What makes up our day to day activity?

We deal with any and all ad hoc enquiries.  Today we have had enquiries from local Chinese and Vietnamese groups in the borough concerning the coronavirus.  We have also been busy making links between the Lambeth Portuguese Wellbeing Network and Archbishop’s Park in North Lambeth; the gardening group is looking to recruit from the local Portuguese community. What’s more, we are representing the voluntary community sector (VCS) at the Lambeth Hubs Network meeting at Black Prince Trust (a new Hubs member). We have just confirmed Mental Health First Aid training locally in Clapham Park. Not to forget, publicising an appeal for a replacement roof for the alpaca’s, lost in the storms at Vauxhall City Farm.  All these by midday on a Tuesday.

We deal with queries like these every day.  When not dealing with queries or offering support, our declared intent is to get out of the office and pound the streets (or generally, in my case, cycle).  We call it Walking the Patch.  We feel it’s a truism to say that you can’t learn about the borough and the people in it by sitting behind a desk.  You need to meet people in-situ.  We only get a more rounded impression of an organisation and the successes and challenges they face by meeting people on their own turf.

We have an ambition.  That ambition is to visit every group that’s active in Lambeth today.  No mean feat.  There are estimated to be around 1,500 voluntary,  community and social enterprise groups in the borough.

From Adventure Playgrounds to Age UK, startup social enterprises tackling mental health issue to “Friends of” the many parks in Lambeth. Moreover, there are the hundreds of other organisations that work across our diverse borough. Each has a dedicated team of leaders, volunteers and service users who bring their expertise and lived experience to the table. And each of which faces their own hurdles and barriers to doing their best work.  Often this is income generation but it could be governance – trustees and directors. Or the constant attrition of keeping groups of volunteers engaged and on a project.

This is where we hope to help.  We have found that the most effective way of reaching out to local groups is to go local.  This might sound obvious, but it’s very easy to expect everyone to come to you.  Or to the Town Hall.  Instead, every couple of weeks we hold 1:1 surgeries in a different part of the borough.

Last week we were at the Stockwell Partnership.  Next week we’ll be at West Norwood Library.  And yes, we are at the Town Hall too.  The surgeries allow us the opportunity to meet small groups in their neighbourhood.  Often these groups have been doing good work in their community for some time, however; they have now grown large enough, or have ambitions large enough that they look to realise. 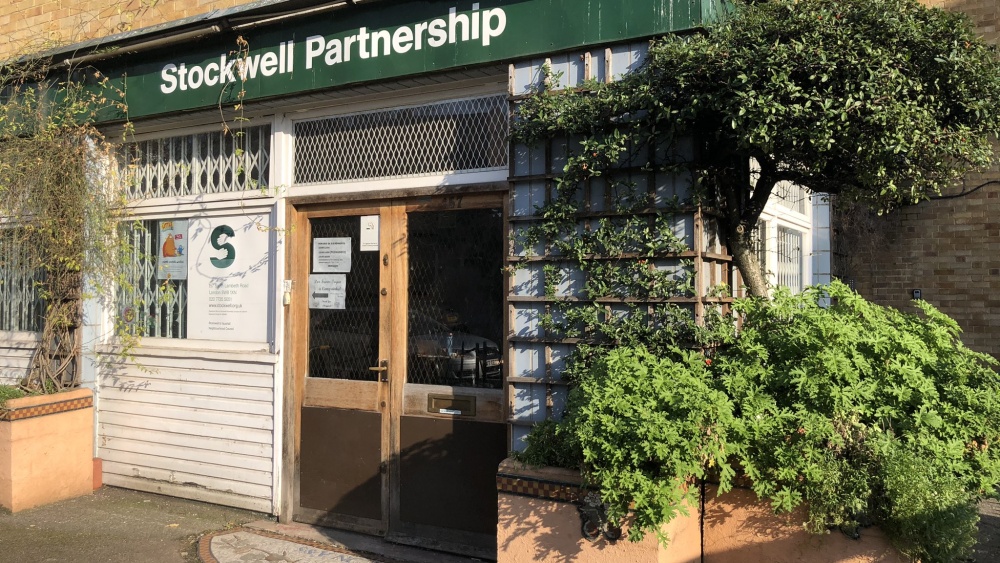 To achieve their ambition of meeting every VCS in Lambeth, Integrate old 1:1 surgeries in different areas of the borough.

This usually involves generating income. Often by applying for funding from one of the large grant making organisations working in the borough such as:

Approaching these organisations for the first time can be daunting.  Also, organisations often need to have a certain level of governance to be considered suitable for funding.  Suddenly a group that has grown organically through a local demand for a service needs to be codified, made official, “professionalised”.  This can be a minefield, and we hope to guide people through it.

We offer a bridge between local grassroots organisations and their desire to fulfil their potential.  That can be many things, such as helping a group become a CIO, a charity or a CIC. It could also be explaining what the difference is between them and what impact that will have on their governance and “fundability”.  It might be that the group has a ‘live bid’ for funding and they want another pair of eyes to cast over their funding application.  Likewise, it may be that they are looking for other groups working in the same field to form a partnership with but don’t know how to go about it.  This leads to another strand we offer – regular training sessions.

Our training sessions aim to equip these groups with the skills they need to prosper in the current climate where the ability to be attractive to funders can be transformative. These are defined by feedback from local groups. They want to know how to fundraise, how to form consortia, how to create links with the private sector and how to evaluate their work either in preparation for or in response to successful bids. 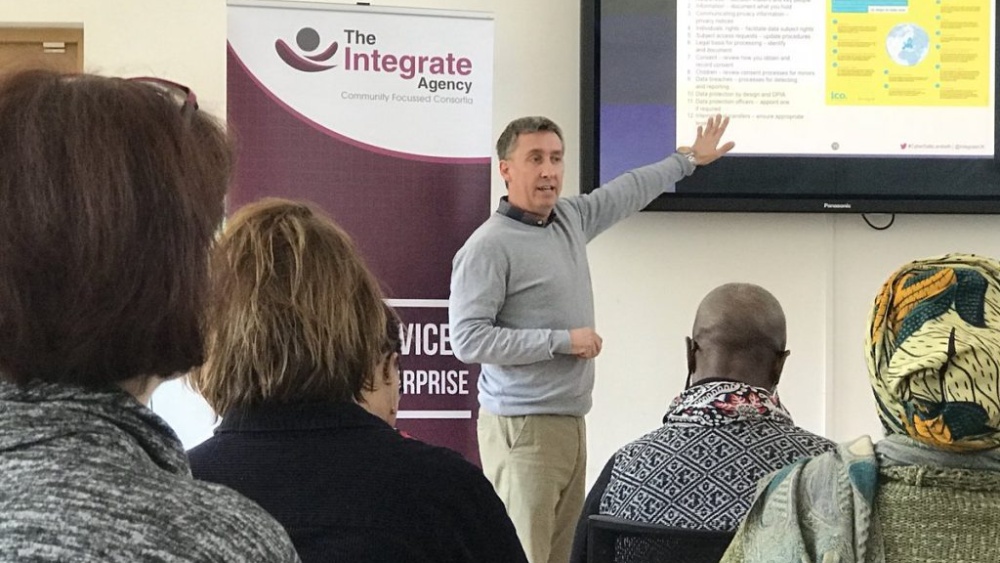 Integrate offer local VCS groups in Lambeth training and advice on a variety of areas such as this cyber security training session.

We deliver these with the help of established groups who have gone through the process of bid writing and governance issues, that have formulated effective volunteer programmes and that know how to capture and account for the work they have done.  In this way, groups can see themselves in these peers and this allows for real world examples of how to forge ahead.

These training requirements and assistance aren’t unique to Lambeth.  Through our membership of London Plus and the London wide CVS Director’s Network, we see these challenges writ large across the capital.  Each borough faces similar challenges and each borough has devised its own ecology as a way of dealing with them. Developed independently of other boroughs, they can end up working in very similar ways.  Regular catch-ups with other boroughs allow us to get a view on which initiatives are working elsewhere. It helps us highlight what the latest, best thinking is, what challenges are on the horizon, and which best practice is likely to work most effectively on our home patch.

We also play a unique role with one of the more ‘popular’ grants in the funding calendar.  The Young Londoner’s Fund (YLF) is a £45 million fund established to help young people in London fulfil their potential.  Integrate is the local network partner for Lambeth and Southwark for the YLF.  This means that we ensure that the VCSE as a whole in Lambeth and Southwark is aware of the fund its application deadlines, the activities it is looking to or is likely to fund and to help with the process of applying itself.

We apply the same thinking here as we do with our day to day work in Lambeth.  We signpost, we remind, we make ourselves available, we provide networking opportunities for the VCSE to get together and talk, to share experiences and successful strategies.  Again, we move around the boroughs, going to where the groups are, we offer 1:1 support.  In the run up to the 2019 deadline, we were available 24/7 to offer guidance over the deadline weekend, right up to the closing of the application window.

This proved to be hugely useful.  There were more applications from Lambeth and Southwark than any other borough in London.  Whilst this reflects the diverse needs of the two boroughs, it also, we hope, in a small way reflects the efforts we made to ensure there were as few barriers to applying as possible.  Once the grants have been awarded, we continue to offer advice and support to successful applicants and help unsuccessful groups by signposting them to alternative sources of income.

All in a day at Integrate…

It’s Tuesday afternoon, we’ve just got back from Black Prince Trust, where we represented Lambeth’s VCS at a meeting of the Lambeth Hubs Network – a collection of community hubs and spaces from across the borough.  There are calls to make, emails to answer, surgeries to organise and the crucial matter of an appeal for that missing roof at Vauxhall City Farm to check on…

We deal with any and all ad hoc enquiries.  Today we have had enquiries from local Chinese and Vietnamese groups in the borough concerning the coronavirus.

We deal with any and all ad hoc enquiries.  Today we have had enquiries from local Chinese and Vietnamese groups in the borough concerning the coronavirus.